Next week I’ll post the list of stories I’ve written this year and my finalized plans for 2020. Right now I am at 39 stories for the year having sent the latest story to Dean last night. I’ll end the year with 40 stories written in 2019, which is exactly my goal for the year.

Wow! I am going to make it. Steve was right.

In 2019, I made the 40 story goal as a challenge to myself. I didn’t really believe I’d make it. Lots of other people told me I was crazy as well. But not Steve. He encouraged me every step of the way. (Though he did suggest last December that I drop my goal for 2019 from 52 stories to 40, which is what I did.)

I thought it would be fun to take a look at the stats as they are right now. Part of the goal this year was to find out what I loved to write, what I was good at, what drew me to the keyboard and what were my personal themes. Here are the totals. 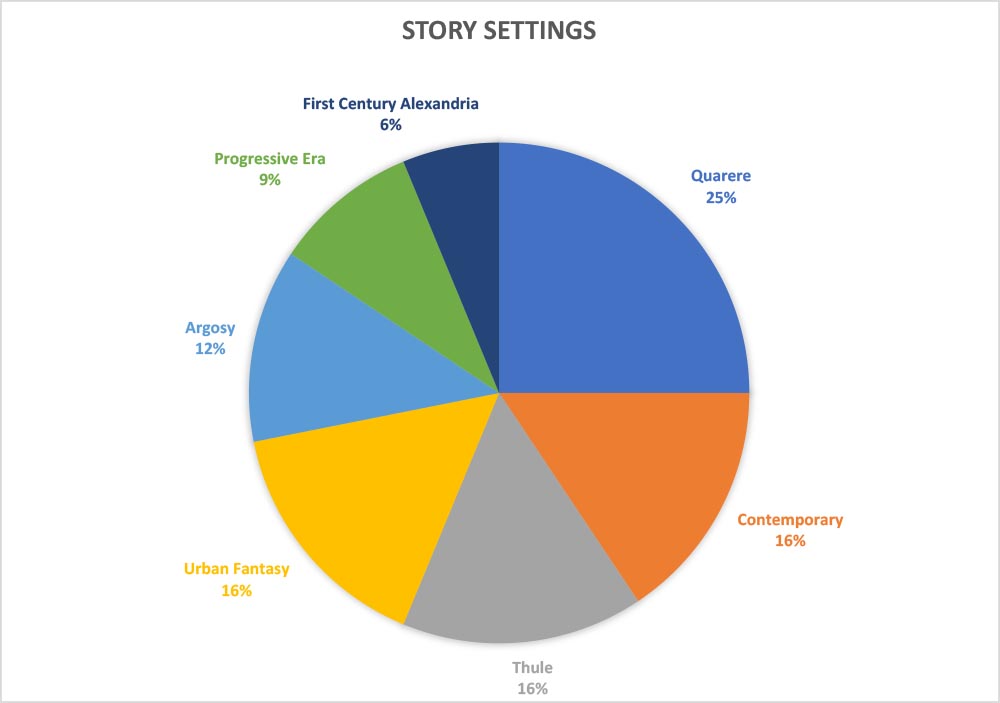 I returned to a few specific worlds: Quarere, Thule, Argosy, and the Progressive Era. Quarere is my Space Opera environment and I spent time there frequently, but was unsatisfied with what I produced except for two stories within that world.

My favorite setting turned out to be Thule, largely because it explored ideas I’m interested in: courage, sacrifice, transformation, and the varying faces of spiritual truth. Also, because Steve originally came up with the idea for Thule, I found it comforting to work within. Whenever I had a question about how something would work, I asked him and he had answers. Or he knew who would.

The Progressive Era surprised me. There weren’t a lot of stories set there but the ones I wrote in those eras were some of my favorites. I expect to spend more time in the 1870s through 1920s in the future.

I expected to set more stories in Argosy and 1st century Alexandria, but didn’t.

Contemporary stories and Urban fantasy stories were all set in Memphis, Colorado, and New Mexico but I bunched them together for ease of review.

There are a few themes that emerged this year. I apparently like settings that include vehicles and transformation. Also this year I tried to write from my own particular Jewish perspective.

I will lean into these themes in the future. They seem to be a sweet spot for me.

Stories with Help/Encouragement from Family and Friends

This one is an easy number: 100%. I’m blessed and deeply grateful.

So that’s the numbers. I think it’s pretty interesting. I’m looking forward to seeing what next year will bring.